Decades of coal and oil production have made climate change an issue for today, and the United States is ready to tackle it. In light of the country’s recently announced clean energy plan, we look at the past, present, and future role of natural gas in reducing the U.S.’s carbon emissions and providing efficient and reliable power generation.

In a timely announcement made on Earth Day 2021, the United States declared new targets to achieve a 50-52% reduction from 2005 levels in economy-wide net greenhouse pollution by 2030, positioning American workers and the energy industry to tackle climate change.

Made during the Global Leaders’ Summit on Climate, the directive also claims to create millions of competitive union jobs, ensuring economic vitality, advancing environmental protection, and improving the health and security of communities across America.

The U.S.’s new targets signal an accelerated change and underscore the drive to net zero emissions by governments across the world. They also emphasize growing calls on public and private sectors to improve sustainability measures and reduce emissions over a shorter timeframe.

A history of change

Throughout the 20th century, coal dominated the U.S. energy mix. EIA figures reveal its consumption reached a peak in 2007, where it then began rapidly declining. A decade later, coal usage had dropped a staggering 36%, as the U.S. had moved towards oil and natural gas.

Referred to as the Shale Revolution, the sudden boom in natural gas production, thanks largely to economical extraction from shale-abundant areas such as the Permian Basin, transformed the U.S. energy industry. The country quickly became the world’s largest producer of natural gas and a key exporter to Mexico and Canada via pipeline. Advancements in the liquefied natural gas (LNG) industry enabled the U.S. to start exporting further afield, particularly to South Korea and Japan. According to a McKinsey report titled The Future of Natural Gas in North America, the U.S. is expected to “head the list of the world’s top LNG exporting regions” by 2023.

Industry experts agree that the displacement of coal by natural gas in the energy mix has been a source of positive change for the country. The larger supplies and lower prices of natural gas have reduced the country’s reliance on imported petroleum, causing total fuel exports to outweigh imports and thus leading to a level of energy independence the U.S. has never seen before. 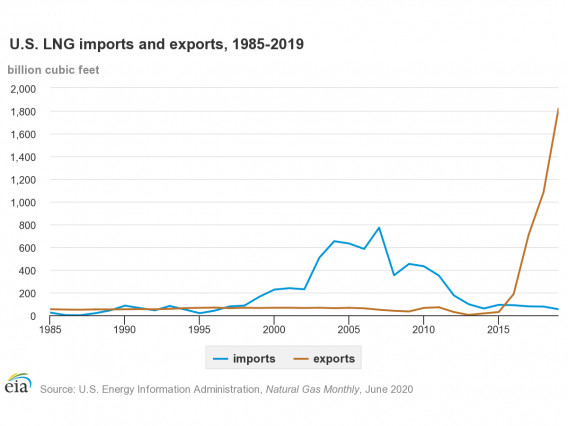 There are significant environmental benefits too. According to the IEA, “natural gas is one of the mainstays of global energy. Where it replaces more polluting fuels, it improves air quality and limits emissions of carbon dioxide.”

Natural gas releases up to 60% less CO2 than coal, and since 2010, coal-to-gas switching has saved around 500 million tons of the greenhouse gas.

The processes used to extract difficult-to-reach shale resources have received some backlash, although hydraulic fracturing (or fracking) has significantly boosted the country’s gas production.

US will remain reliant on natural gas

The U.S. administration’s new clean energy vision depicts a renewables-driven sector powered by solar and wind farm investments. The plan is ambitious yet doesn’t address the role natural gas will play in a more sustainable future. Economical, stable, and reliable, gas became indispensable while renewables have yet to be effectively and economically scaled.

Renewables are inherently intermittent, with production halting when the sun stops shining and the wind stops blowing (beyond a few hours of battery storage). We can look to California, a leading state in renewable energy consumption, as one example. This reliance on renewables has been matched by a reduced dependence on natural gas. In 2018, an estimated 34% of the state’s electricity was generated from renewable sources. California experienced well reported blackouts last August.

And in a period of exceptional extremes in weather this has proved even more challenging for thousands of households left repeatedly without power when severe storms, unexpected freezing conditions or record-breaking heatwaves and wildfires strike. It is possible that wind turbines can in part explain the outcome from the unexpectedly severe winter freeze in Texas that knocked out power supplies across the state. Although nearly half of Texas’s wind-energy capacity, which accounts for 20% of the state’s electricity supply, was lost at the peak of the freeze, twice as much overall was lost from other sources.

Taken together, recent events from Texas to California, Oregon to Washington reveal a pattern of reliance on renewables and underline the need to keep a supply of natural gas available to stabilize the grid.

Renewables are slowly improving, and investments are increasing, but many experts believe that natural gas will bridge the road to renewables for the foreseeable future. Meanwhile, the rising penetration of renewable energy emphasizes the need for distributed power solutions to play a larger role in responsibly ensuring predictable and economical heat and power.

Projections indeed show sustained growth for natural gas. As the U.S. ramps up its clean energy efforts, the country will continue to be an integral part of natural gas markets and a significant source of global supply.

There will, however, be a bigger focus on lowering the oil and gas industry’s carbon footprint to help the nation meet emissions reduction targets. For its part, INNIO is working across many fronts to help accelerate industry efforts in this regard. It is seeking, for example, to help reduce routine flaring of natural gas.

Fugitive methane emissions have been another concern, leading to the establishment of the One Future coalition – an association of 40 of the largest natural gas companies in the U.S., who collectively pledged to reduce methane emissions to 1% (or lower) by 2025. In 2019, One Future registered a methane intensity number of 0.334%, beating its original goal by 67%.

In addition, renewable natural gas (or biogas) collected from landfills, livestock operations, and wastewater treatment will become an increasingly used transportation fuel in the form of compressed natural gas or LNG.

There are also relatively simple investments that can result in immediate payback in reduced emissions, notably through upgrading old equipment. Clean energy technologies such as carbon capture, utilization, and storage (CCUS) solutions will play a huge role. CCUS is also deployed in the production of blue hydrogen, where natural gas is split into hydrogen and CO2. As the greenhouse gases are captured and stored rather than released into the earth’s atmosphere, the environmental impact is low.

It is clear that energy demands are rising, as is the pressure for cleaner sources. With the increased use of more sustainable technology and the continued achievements of associations like One Future, Project Canary, American Natural Gas, and Southern Gas Association, natural gas is set to satisfy both sides of the equation.