The Sweet Spot of the Brazilian Sugar-Energy System

Brazil is contributing to the global effort to reduce carbon emissions with very ambitious environmental goals committing to reach emissions neutrality by 2050. An important component of achieving carbon neutrality for Brazil lies in the power industry.

Brazil, a resource rich country, will need to concentrate efforts on the phase out of fossil fuels-based energy while ramping up the development and deployment of renewable energy. Fortunately, Brazil is no stranger to renewable energy as it is currently the world’s third leading country in installed renewable energy capacity (Figure 1). The Brazilian energy matrix maintains more than 85% of electricity that is derived from renewable sources with approximately 65% generated from hydropower. Other significant sources are wind at about 9% and biomass (that includes bioelectricity generated from sugarcane bagasse) at approximately 8%. 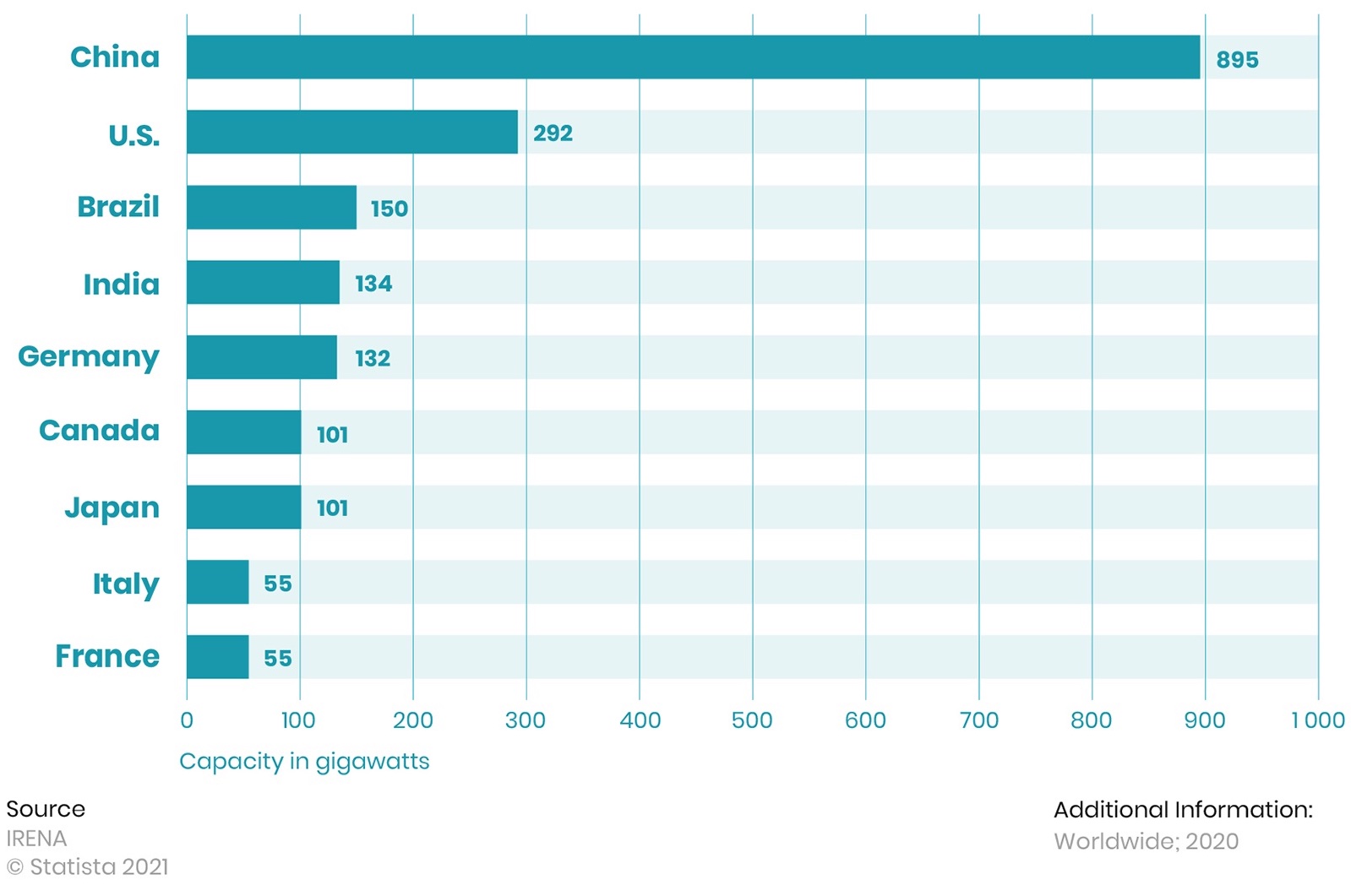 A promising source of sustainable power

While hydropower is the majority of Brazil’s renewable energy capacity, sugarcane has long been a promising source of renewable fuel that could catapult Brazil into being the leading country in installed renewable energy capacity. Now more than ever, not only Brazil can achieve its 2050 emissions neutrality goal, but it can also become a world leader in the production, export, and use of renewable sugar-based fuels through the application of technology and innovation across its sugar-energy system.

Brazil is historically the world’s largest producer of sugarcane as well as the world’s largest exporter of sugar, producing more than 29 million metric tons of sugarcane for the 2019/20 crop season (Figure 2). Brazil’s sugarcane industry presents the opportunity for biogas production – as much as 57.6 million m³/day of biogas – leading to biogas which is a renewable natural gas. It is “renewable” because sugarcane is a perineal plant that grows back yearly and when processed will continually produce waste that is converted to biogas. New biogas production technologies using residues such as vinasse and filter cake coupled with advanced gas engine technology lay a path for Brazil to generate gigawatts of clean and sustainable power. In terms of logistics, biogas is a storable fuel that is capable of being compressed and liquefied. This could lead to the production of renewable compressed natural gas or renewable liquefied natural gas which could then be transported to supply large industrial customers. This type of infrastructure ensures quick and efficient fuel delivery, bypassing the construction of new gas pipelines that require major investments and a long-term construction.

Figure 2. Production, consumption, and trade flows for the 2019/20 crop 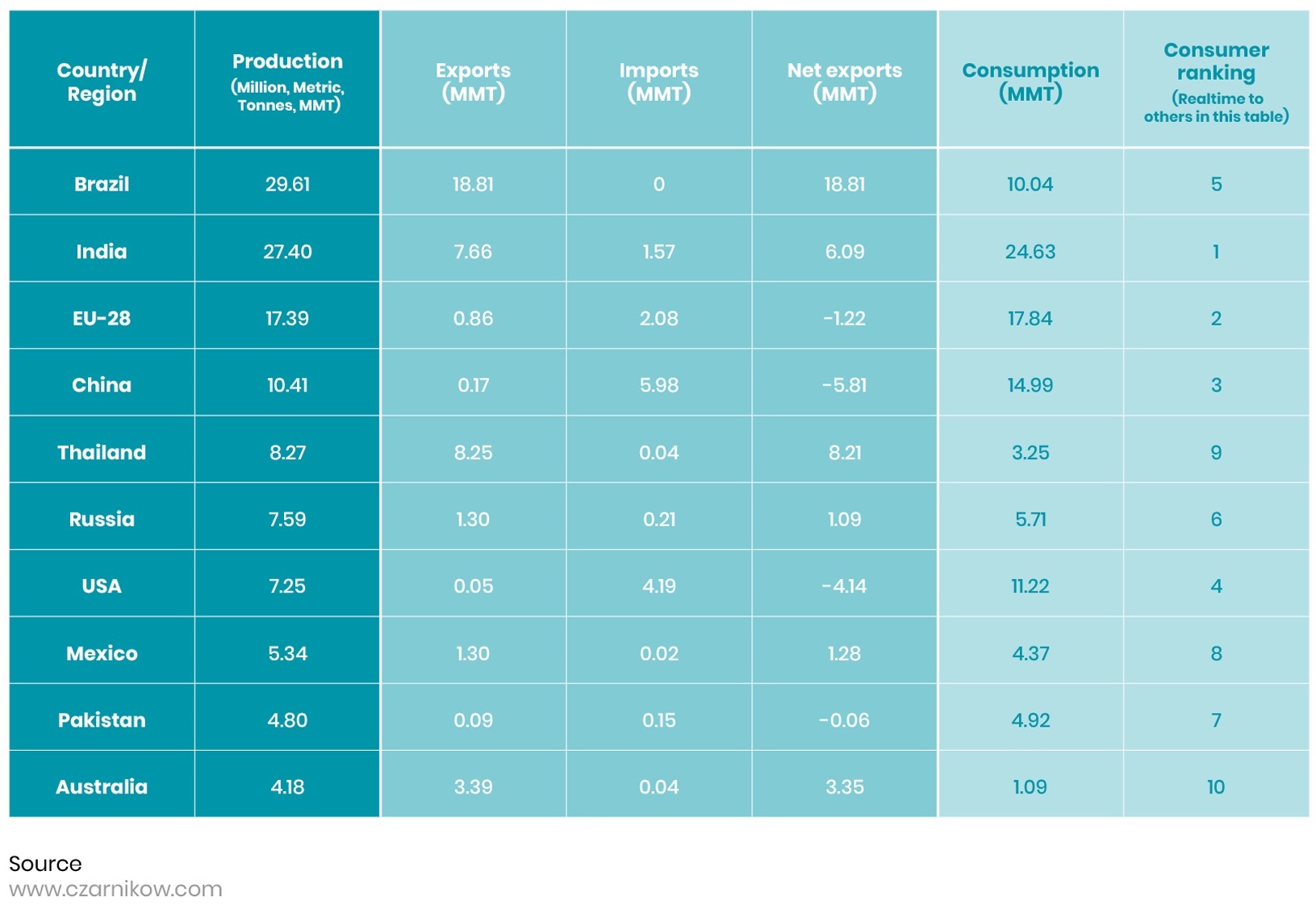 Biogas’ maintains a very strategic advantage that is decentralization, allowing the industry to develop in areas that are not integrated with pipelines and paving the way for future integration. However, Biogas produced from sugarcane has a major sweet spot that can be transformative for the power industry. As the world increasingly embraces renewable power generation – wind turbines, photovoltaics and hydropower – to meet global commitments to achieve carbon neutrality, renewables intermittency remains a major challenge to continuous renewable power generation. Brazil’s sugar-energy system presents a renewable supply of biogas fuel that can be used in power generation technology, such as that of a Jenbacher gas engine, that offers highly flexible deployment and can be ramped up to full load in minutes. 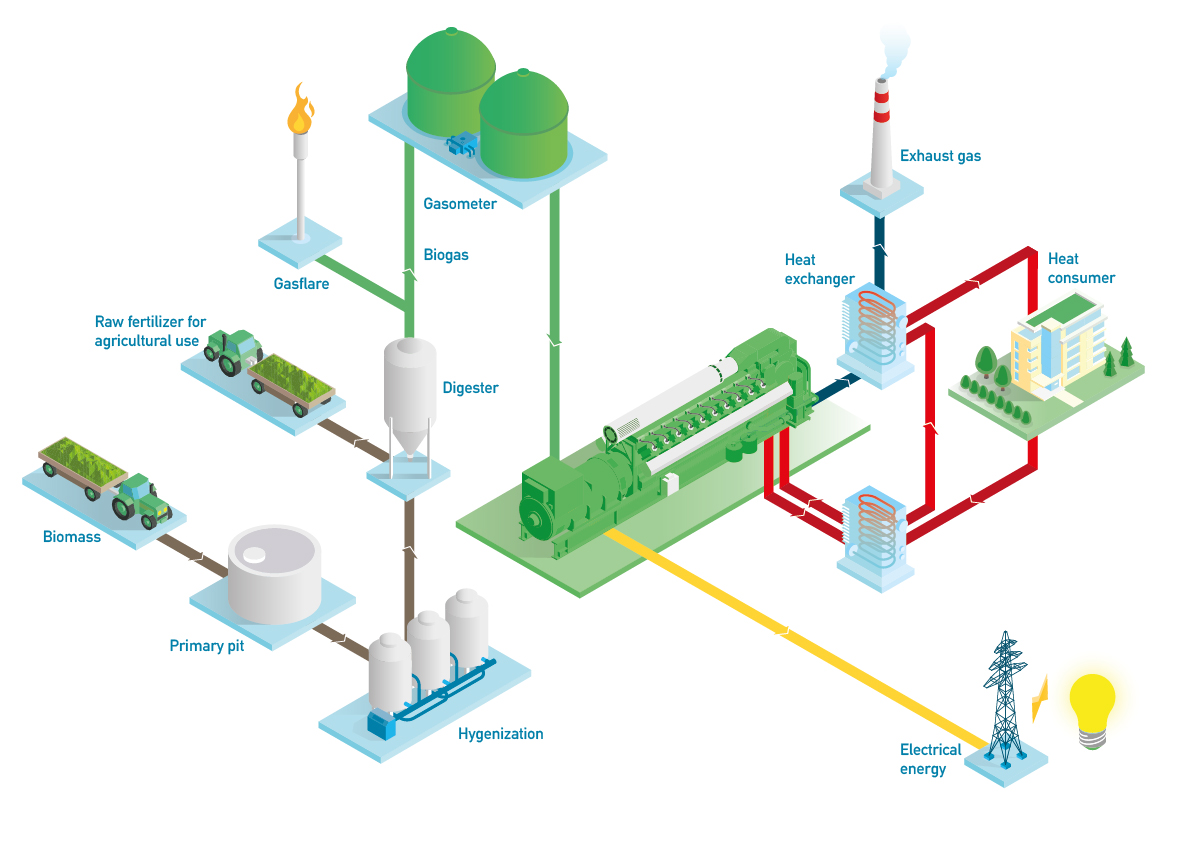 Brazil sugar-energy system enjoys the world’s greatest potential for biogas production. That potential refers to all available organic residues, particularly those from sugarcane, that are currently not being used to produce power. Brazil’s sugar-energy system can benefit the country as well as the world with decentralized fuel and electricity generation.

INNIO takes the Silver, keeps an eye on Gold

INNIO is ready for Hydrogen!