Shaping the Future with Innovative Engines

Even as a child, she was fascinated by science. And today, brainstorming technical problems to come up with optimized, innovative solutions is her forte. Passionate, level-headed, and really good at her job, she was tasked in only her second year as an INNIO employee with managing a flagship project: the development of the world’s first 1 MW gas engine to run on hydrogen as well as natural gas. IN.INNIO talks to Zita Baumann, Special Gases Performance Engineer at INNIO Jenbacher.

Zita, when and why did you decide to study mechanical engineering?

I’ve loved science as long as I can remember. My dad is an electrical engineer, and I was allowed to go with him when he worked on ships’ engines. I enjoyed those times so much. To me, they were as precious as our family cruises on the Danube.

When did you move to Jenbach and what were your first tasks here?

After graduating from the Technical University of Munich, I began a two-year, four-role trainee program in Jenbach in 2016. I started out on the Emissions team, which plays a key role given that regulations are becoming more and more stringent. Then I worked with the Performance team looking at combustion, which was my first experience with special gases. My next stop, with the Design team, was all about how our engines are designed. And in the final stage of the program, I helped the Service team optimize a component. After my traineeship I joined the Special Gases team as a permanent employee ... 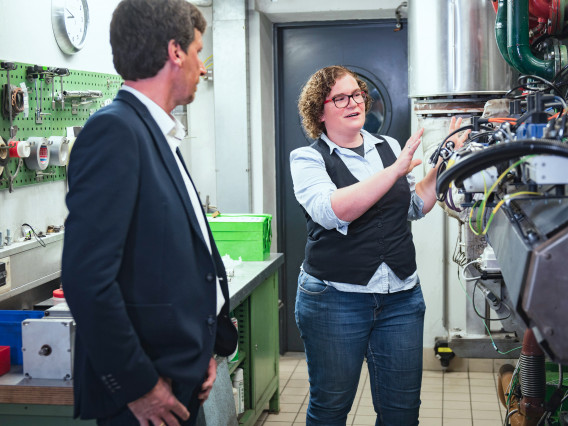 "There was a lot we couldn’t predict, and hydrogen is a challenging combustion fuel to work with. But we overcame every single challenge."

… and within a year, you were tasked with managing an INNIO flagship project – the first 1 MW hydrogen engine. How did you find the two years you spent on that, from specification to project completion?

Intense. There were lots of challenges and ongoing developments to deal with. It was all new to me, both technically and in terms of actually managing a project. But having a fantastic, committed team around me made all the difference. Unfortunately, due to the pandemic we couldn’t go get a beer together to celebrate our achievements along the way, but that didn’t detract from how delighted we all were to hit each milestone.

The pilot project for HanseWerk Natur in Hamburg represents not one but two world firsts. Please tell us about that.

It’s the world’s first large-scale gas engine in the 1 MW range capable of running on 100% natural gas or hydrogen-natural gas mixtures, and even 100% hydrogen. It’s also the first natural gas power plant to be converted in the field to run flexibly on variable proportions of hydrogen.

What were the biggest challenges during the project?

The whole picture: time-critical development and production, testing on the test bench, parts procurement, and then the first fires as we call them – initially in Jenbach and then in Hamburg, where the pressure and excitement obviously stepped up a gear. The project involved a lot of firsts. There was a lot we couldn’t predict, and hydrogen is a challenging combustion fuel to work with. But we overcame every single challenge.

INNIO Jenbacher gas engines have been running on hydrogen-rich gases for 30 years now – like steel gas for example, which has a hydrogen concentration of 70% (volume). How difficult was it to reach 100% hydrogen?

It required a huge leap because the engine design is very distinctive in one particular respect: In conventional engines, the fuel is mixed downstream of the air filter, whereas hydrogen is mixed directly upstream of the combustion chamber.

How significant is this pilot project for hydrogen cogeneration plants of the future?

The HanseWerk Natur pilot project in Hamburg-Othmarschen sends out a very clear message that we can convert installed natural gas engines – in the field – to run fuel flexibly, and that gas engines are set to play a big part in the energy transition.

"I believe productive teamwork comes down to mutual respect and appreciation."

Europe aims to be the first climate-neutral continent by 2050. How important is hydrogen in achieving such an ambitious target?

There’s no doubt that hydrogen is going to be increasingly important, both as a fuel and as a storage medium. But the two key requirements for that are appropriate political framework conditions and investment in boosting the efficiency and capacity of hydrogen production. The energy solution of the future consists of the right mix of technologies.

As a woman working in what is still a male-dominated field, we would love to hear your perspective on that.

In engineering, we are an international and very open-minded bunch of people from all walks of life. We see the potential in diversity. I believe productive teamwork comes down to mutual respect and appreciation. Personal differences don’t come into it. But I should also say that as the youngest of five sisters I learned to fight my corner early on in life.

So what’s next? What’s your career goal?

If we want a sustainable energy transition, we need to find alternatives to natural gas. One of the answers to that is special gases, which is where my expertise lies. I want to help shape the future with innovative engines. My mantra is “from pilot project to future product!”