The United States military holds a total population of approximately 2.1 million women and men serving their country both internationally and, when called upon, within their communities. A critical part of the United States military are both the National Guard and the Reserves, member of which are commissioned or enlisted in the military and employed in the civilian workforce. Providing individual skills for two important organizations is never easy, especially when members of the Guard and Reserve are scheduled for active duty or called up usually on very short notice. These “Citizen Soldiers” need to be supported, especially by their civilian employers. Enter the National Committee for Employer Support of the Guard and Reserve (ESGR). 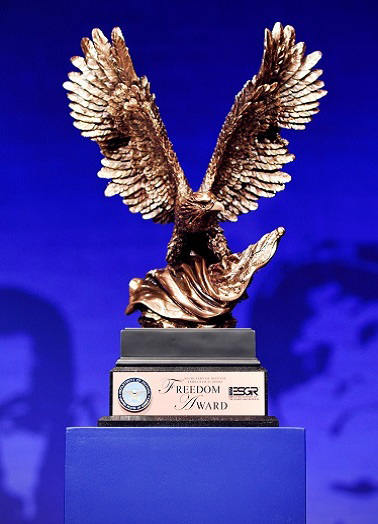 Understandably, businesses and other organizations employing Guard and Reserve members experience disruption when Citizen Soldiers are called to active duty. In an effort to gain and maintain employer support for Guard and Reserve service, ESGR, a Department of Defense (DoD) agency established in 1972, began increasing awareness of federal protection law, resolving employer conflicts through mediation, and recognizing outstanding support from business. ESGR instituted a series of awards that would be used to recognize outstanding employer support. The awards include the Freedom Award, the Patriot Award, the Above and Beyond Award, and the Pro Patria Award. Of all the awards, the Freedom Award – instituted in 1996 – is the highest award in the series.

A good challenge to have

Businesses are aware that the Citizen Soldier must be supported so that they do not worry about job security, family well-being and career advancement when they step away from the civilian careers. And because there is so much support for Guard and Reserve members, the military employees want to nominate their respective civilian employers. While for ESGR, this is a good challenge to have, such great support results in a significant number of employers who are nominated for recognition. This means that every year, the DoD receives thousands of nominations for the award, and in 2021, it received more than 3,000 nominations across the United States and its territories spanning both large and small public and private employers. Of the more than 3,000 nominated employers, INNIO Waukesha became part of a very select group of employers who were chosen for the Freedom Award. The Secretary of Defense recognized INNIO and 14 other employer organizations to receive the 2021 Secretary of Defense Employer Support Freedom Award for their support of National Guard and Reserve employees. Each of the awards were based on nominations by each organization’s employees serving in a National Guard or Reserve component.

William “Bud” Hittie, President of INNIO Waukesha:
“We are honored to receive this acknowledgment from the Secretary of Defense. We recognize that serving in the Guard or Reserve is a sacred duty that brings professional and personal challenges for our employees carrying out their obligations to protect our country.National Guard and Reserve personnel bear multiple responsibilities, including family, country, and employer. At INNIO Waukesha we foster a culture of success for our employees, and we seek to ensure that we support our service members. It is our earnest intention to mitigate any concerns that may arise regarding their roles in the company when National Guard or Reserve employees are called up for training or active duty, and there is no better external validation that we are getting it right than being chosen for the Freedom Award.”

Of all the awards in the ESGR program, the pinnacle of awards is the Secretary of Defense Employer Support Freedom Award. The Freedom Award is the highest recognition given by the U.S. Government to employers for their outstanding support of employees serving in the Guard and Reserve. For an employer to be considered for the Secretary of Defense Employer Support Freedom Award, an employer must be nominated by a National Guard or Reserve Component employee employed in their organization, or a family member acting on their behalf. Then, the ESGR State Committees review nominations and submit recommendations to advance to the next round in each of the three categories: small employer, large employer, and public sector. Next, a national selection board composed of senior DoD officials, business leaders, and previous awardees select up to 15 employers to receive the Secretary’s prestigious award. A key part of the annual recognition is having the President also sign a proclamation for "National Employer Support of the Guard and Reserve Week," that highlights the sacrifices of Guard and Reserve members and their families coupled with the outstanding support they receive from their employers. The award is formally presented at the recipient’s location of choice by the ESGR State Committee leadership.

The Secretary of Defense Employer Freedom Award is celebrating its 25th year of establishment. Since its inception in 1996, 310 employers have been honored.